We love SQUIRL’s paint job on the mobile comics factory… there are no words! …So here’s some pictures.
Thanks squirl. 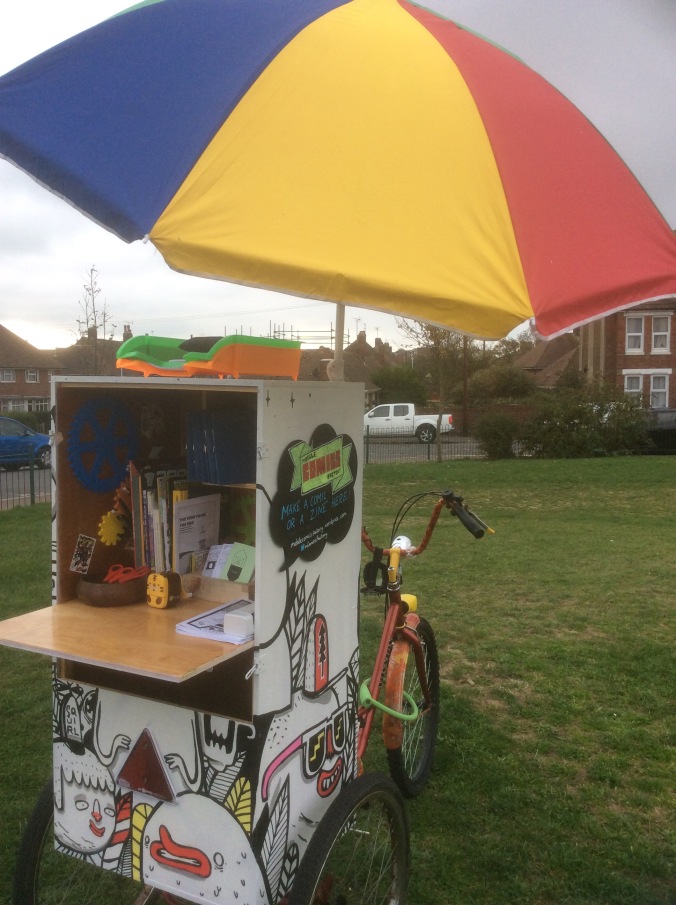 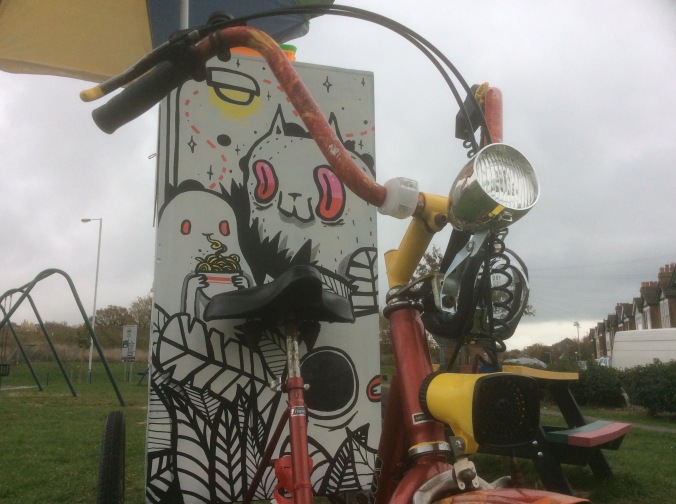 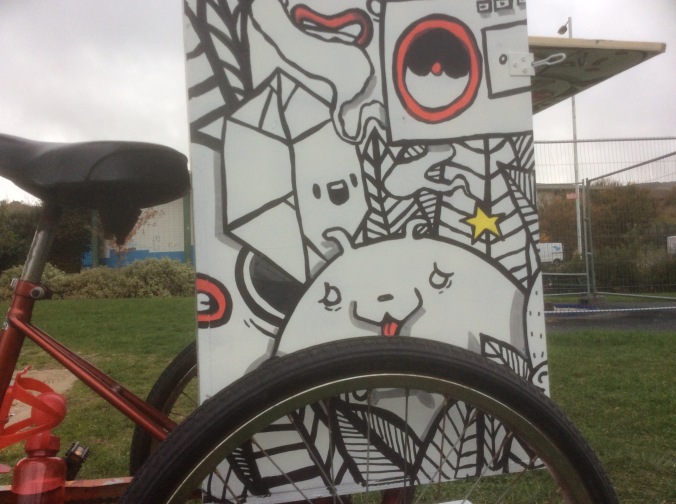 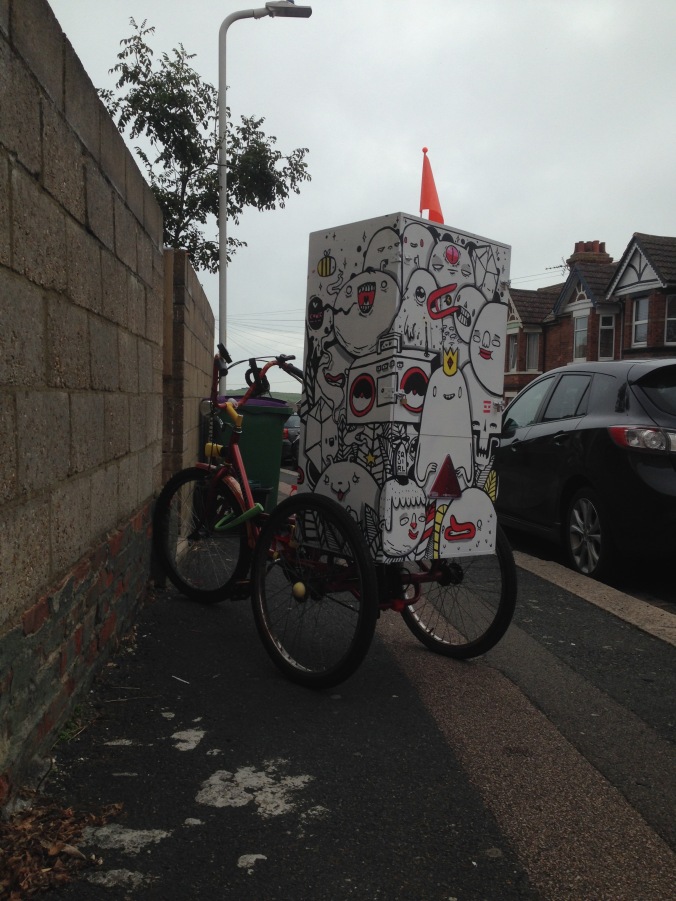 yesterday ended very late due to my computer being a jerk basically! I’ve been trying to edit in a simple intermission to film I’m screening tonight as a fundraiser but my laptop didn’t want to play ball.

depite that today still began bright and early as I spent some time researching putting a small video player into the MCF.

BY 9am I was out in the backyard under the blistering heat to get the MCF mobile unit up and running. While I was out there I thought I’d make a quick video to give you a glimpse of what I’ve been up to.

and today isn’t over yet. Our next post will be all about tonight’s fundraiser at the lime bar

Oh… And by the way, I can confirm that Finn and Jake are coming to the MCF! Thank you Boom! Studios for agreeing donate to the project.

The story of how we found the perfect vehicle for the mobile comics factory.

Since its earliest inception my plan for the Mobile Comics Factory was to have it towed by bicycle. But as the date I need to start fabrication by draws nearer, as I sketch and mentally run through the scenarios, I begin to realise that it just isn’t the right solution. If we had a trailer then every time we stopped we’d need to put the bike on a stand and prop the trailer to stop it tipping. we wouldn’t be able to just roll up,somewhere and start, it would take considerable time to set up and dismantle every time. This didn’t seem fun to me and it increased the risk of things getting damaged.

So I hit upon using a tricycle – yes such a thing does exist for adults.

I know what you’re thinking, I thought it too. When you hear tricycle you see-

But, if you really think about it a trike is perfect. And it’s about as hipster as a plaid moustache organising his vinyl by BPM. it’s going to get attention.

Add to that the fact that I’d feel much more in control when riding it around – I’ve never towed a factory before after all – and a trike is the perfect solution.

So I began to research purchasing a new tricycle to Frankenstein into the Mobile Comics Factory- though tempting, it is prohibitively expensive- equal to our whole projected fabrication budget. I trawled eBay looking for something second hand but the prices still aren’t favourable. Even for trikes that are more rusticle than tricycle.

I haggled and bargained with a lady across county because her daughter in law gave me a tip off that she had a trike in her garden that had been corroding, unridden for years. We came close to a deal but then I can only guess she smelled my enthusiasm – either that or someone showed her how much she could sell it for in eBay because that trail went cold.

Then just to broaden my net I tried Gumtree. I couldn’t believe my eyes- a tricycle for only £40, and in my home town! 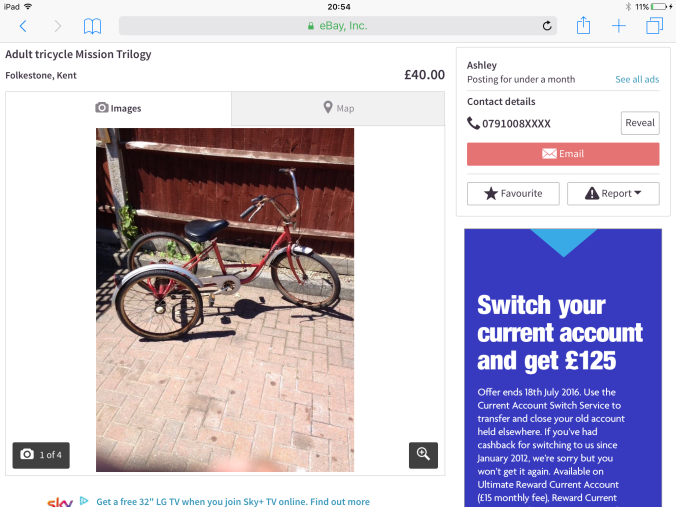 I emailed the seller, I rang and left messages. I yelled from the top window of my house hoping he’d hear me… But I was too late. He’d already sold it to a guy who lived somewhere in the wastelands beyond ashford. My Beaty had gone.

I had to face it, I had to get the big bucks out or come up with something else. Then it happened… Another listings web site, a grainy image of a trike in a barn of some sort. The asking price; £75. The postcode, close enough. It was time. I swooped in with an offer of £60 and clinched it. But as I celebrated I noticed something strange about the photo…

The red colour, the missing mud guard, its location – just beyond Ashford, where there be dragons. It was all too familiar… It was the very same trike from Folkestone days before… But for nearly twice the cost.

The seller even confirmed this fact, admitting that he did not have time himself to do the repairs. I didn’t care that I had to spend another £20 to find her, she came home to me, to the factory, and what a beauty she is.

PART 2 a world beyond Ashford

If Folkestone were the head and skull region of a magnificent star child. Ashford would be (geographically speaking) somewhere just below the nape of the neck, but probably not anything vital. And the farm we went to, where we intended to purchase the trike, that was somewhere along the small intestine: Long and winding roads lead us to our destination. Some were just dirt, others so narrow that any gnat that comes walking down the street probably hopes that he won’t see another gnat walking the other way, so that he doesn’t have to engage in that awkward moment when you both try and let the other go first.

She slumbered at the edge of her barn. Her dazzling beauty obscured by a layer of rust, and undersold by the lacklustre British weather that hung somewhere between overcast and drizzling that whole day. Her power was masked but I saw it clearly, the potential in her. The space between her wheels where once there would have sat a wire basket was now empty. And invited a new purpose- placement of the Mobile Comics factory.

It’s going to take work but this trike gives us the opportunity to make the Factory that I see in my head, and make it the best it can be, and on budget!

So onto the trailer it went, it’s front wheel overhung a little. We strapped it down there in the yard whilst tractors passed by doing whatever it is that tractors do.

When I got it back to my house – which will be its home till we find something more permanent we hit a snag. The trike doesn’t not fit through my gate! We had to pass it trough by putting it on its side and twisting.

But it’s home now and designs are flowing now that we have some measurements to take. I noticed the writing on the trike too, the manufacturers name:

Yes its Mission, and this trike will be on a mission to bring creativity to Folkestone teens. It seems kind of appropriate.

See you next time for more updates. 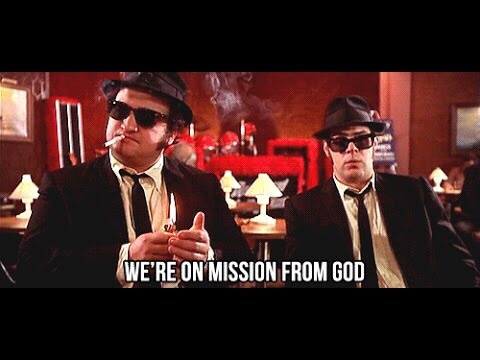 Submit a comic or zine